Every year it comes over me. I get consumed by obsessive thoughts about gardening and land planning. The futility, though, is in the fact that I’m not particularly good at it. The planning is tons of fun, but I invariably find myself distracted when it comes to actually maintaining it.

…and the apples and pears are still standing!

My father is amazing at gardening, which is probably why I feel both the urge and the inadequacy so keenly. Growing up, he would regularly coax legions of tomatoes, cucumbers, peppers, squash, chard, beans, etc. from a pretty tiny patch of garden he would deliberately till and tend throughout the length and breadth of the growing season. All the fresh, hyper-local produce probably helped contribute to my family’s overall health, as well as reduce food expenditures. I never had pre-made, bottle tomato sauce until college or later.

Today, I’m just thrilled I haven’t managed to kill the apple and pear trees, or even the blueberries, grape or one of the two sketchy peaches I put in during last year’s fit of optimism, further fueled by having just purchased the house. 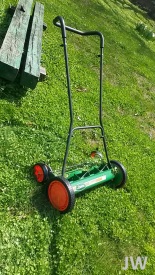 At this point, I would have to call this a pathology. The old-time, human-powered push mowers have fascinated me for a long time, probably since I haven’t really had to even mow a lawn since childhood.

Seeing one for $20 at a rummage sale completely eroded my will to resist. Justifications sprung to the ready to compound the choice: Think of the environment! Think of the savings! Think of the exercise! In the end, I do accept that I really am just crazy. I’ve resolved to set a reasonable goal of mowing my lawn over the course of a week. Luckily, my standards are suitably low.

Last year I noticed this odd, semi-circular grouping of stones set into the edge of the hillside. My curiosity was held back by the thick overgrowth, which included some fairly substantial, prickly raspberries. I resolved that, before next Summer when the growth would once again be in full force, I would trim the overgrowth (having determined I had more than enough raspberries without those, and that my child and I wouldn’t be harvesting them anyway, given the virtual cliff face they bordered) and get to seeing what’s what. In the meantime, I daydreamed and wondered about what it could be: an odd seating area? A fire pit? Maybe my mind was thinking too much about future entertaining possibilities. 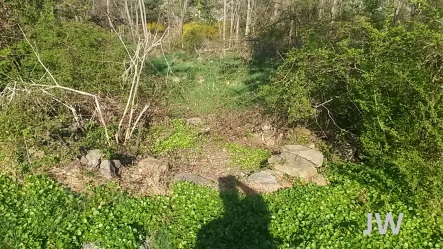 I’ve taken an initial pass at trimming it out, and it could be confirmation bias, but we might have a fire pit  on our hands! I did, at least, spot charred wood underneath the brush, tempting even more fantasies about what we can do with it.

For now, I think I have my hands full, though I did recently discover that there used to be a large pool up on this hill throughout the middle through latter parts of the twentieth century…

The view of a former pool (and likely buried concrete foundation) from my favorite relaxing spot.

This entry was posted in Garden and tagged Entertaining, Garden, Outdoors, Plants. Bookmark the permalink.