I learned some good lessons from the first time around, so I took another pass at composing monogrammed cookies for a friend’s birthday.

This time I dug out a peanut butter chocolate pinwheel recipe. I couldn’t resist dying the dough to customize it a bit more. Also, I followed a previous observation to blend the colors while mixing the dough to the best extent possible, which may have kept things softer, by reducing overwork on the dough.

Another adaptation based on previous experience is that I ignored the recipe’s direction to chill the dough, since I had a hunch the softer dough would be a lot easier to “sculpt” into the shapes I wanted – and I was right.

I abandoned the more scientific technique from the first try with rolling, cutting and layering precise strips in favor of using my judgment and just glomming everything together and using a ruler’s edge to straighten up the borders as I went.

It worked much better – and I think it was a bit quicker, too – but that might be more a matter of personal style. 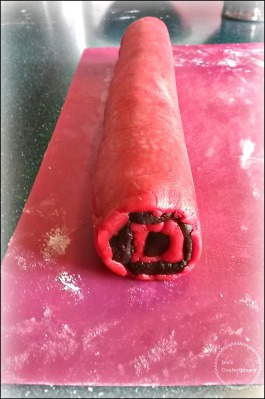 I only tucked the dough into the freezer for around an hour to make it firmer to slice.

Trying to avoid waste as much as possible, I just rolled it into a silicone mat for its time in the freezer, rather than wrapping it in something I’d only have to pitch anyway after such a short time.