OK, this Hanukah I challenged myself to park the deep fat fryer on my counter and produce *something* fried every day for a week. Much to everyone’s disappointment, donuts/sufganiyot never materialized (that was before my weak aspirations regarding yeasted things were reinvigorated recently), but I did make some interesting discoveries along the way.

The biggest player here was the wonton wrapper – I even cut it into strips and fried them on their own as an accompaniment. Apart from Hanukah, these would also be awesome game day treats!

They also helped me with a novel solution to a food waste issue in my house.

I’ll come clean: I don’t like salmon*. I feel like I should, but I just can’t unless there are lots of spices and it’s the only option. The spouse, however, loves it and often prefers the salmon cream cheese when we have bagels at home. There is always a surplus of the stuff after brunch, and I’ve been at a loss as to what to do with it.

Until I tried out won ton wrappers, that is.

Shellfish allergies and our modest level of household kashrut keep delightful things like crab rangoon off the spouse’s plate, but I figured, why not salmon rangoon?

A while ago, I saw a Cake Boss episode where they were making a massive amount of mini cannolis and they had a great technique for prepping the blank, raw shells for rapid rolling and assembly. Although I had a few hundred less to make than they did, I’m still lazy and so this approach has been helpful to me a number of times. 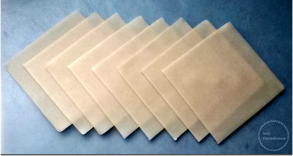 You lay them out overlapping with only the edges you want to stick together exposed and then you can coat them in egg, water or whatever you need to in one swoop of the pastry brush (or finger, we don’t judge). After that, you’ll be filling or rolling your final pieces like a well-oiled machine. 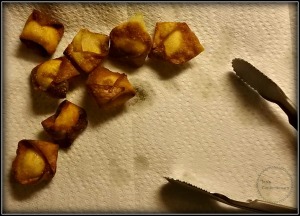 I’m working on turning an enclosed porch into a modest, indoor herb garden, so in December I picked up one of those pretty rosemary plants trimmed to look like a Christmas tree. It looked festive. I killed it pretty quickly. But before I did, I got to have a little fun with what remained of the viable herb on it.

While I don’t like salmon, I didn’t want to miss out on the yummy rangoony goodness, so I came up with an alternate for myself: plain cream cheese with a sprinkling of cut-up rosemary. Roughly one blade? leaf? spike? (what do you call those things?) per won ton seemed to give a nice flavor without overpowering.

I made these a different shape – no way I was going to risk confusing the two flavors. I had some good results speeding up production by lying several in a grid pattern to wet down the edges more quickly.

And the taste was pretty magnificent. I think I’ll try again at keeping a rosemary plant. 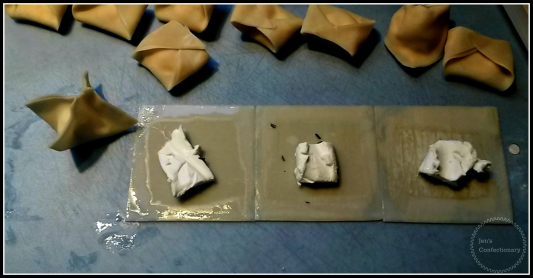